Many users need frequent access to software, folders, and file shortcuts in the desktop area in Windows 11.When you have a lot of windows open, minimizing them all at once isn't exactly the ideal way to access the desktop.

Thankfully, you don't have to do this every time you need to view the Windows desktop area.Here are a few different ways you can quickly display the Windows 11 desktop. 1. How to show the desktop by clicking the "Show Desktop" button

Windows 11, like many of its predecessors, includes a button to show the desktop on its taskbar.The button is on the far right of the taskbar and is a fairly small button.It's barely noticeable, but when you hover your cursor over it, you should see a "Show Desktop" tooltip, like the screenshot below.Clicking this button will minimize all open windows to quickly reveal the desktop. 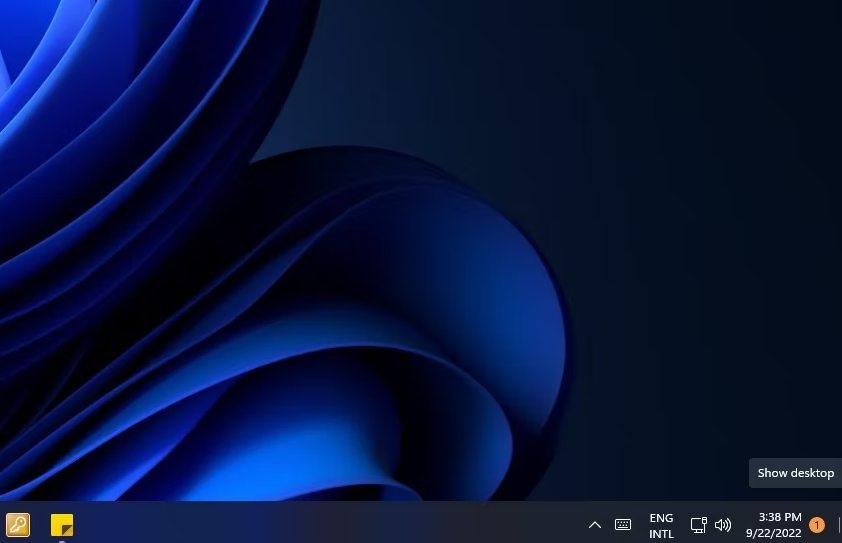 You don't have to manually reopen all windows after hiding them with this button.Instead, click the Show Desktop button a second time.Doing so will restore all windows that were previously minimized.

This feature should be enabled by default in Windows 11.However, if it's not enabled, you won't be able to press the "Show Desktop" button.If the button doesn't work, turn on the feature in the following steps:

1. Right-click somewhere on the Windows 11 taskbar and select Taskbar settings.

3. Then select the Select far corner of the taskbar to display the desktop option. 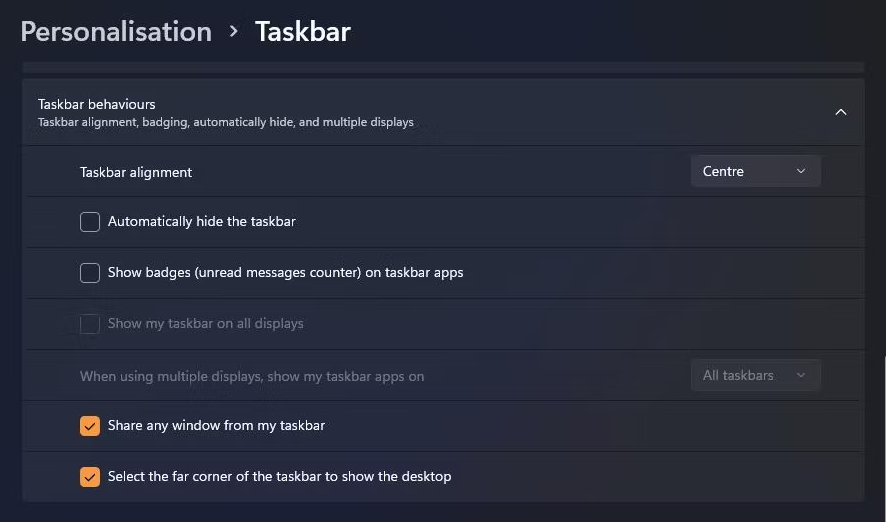 2. How to display the desktop with a custom taskbar shortcut

So the default show desktop button is a bit small.Do you like a slightly larger alternative taskbar button to quickly bring up the desktop?If so, you can set a bigger and better custom taskbar shortcut:

1. Right-click on an area of ​​the desktop that does not have any shortcuts and select "New". 5. Erase the default Explorer title and enter Show Desktop in the Type a name box. Now you can click a larger Show Desktop Taskbar button to hide all open windows.The shortcut will have a default folder library icon that matches the File Explorer button.So, before pinning the "Show Desktop" shortcut to the taskbar, it's a good idea to change its icon.Methods as below:

1. Right-click the display desktop icon and select the Properties option for the shortcut.

2. Click "Change Icon" and a window will pop up where you can choose an icon. 5. Then select "OK" to close the properties window and pin the shortcut to the taskbar.

You can also pin the shortcut that shows the desktop to the start menu.Brings up the classic context menu showing desktop shortcuts.Then select the "Pin to Start Menu" option instead of the Taskbar option.

3. How to display desktop with power user menu

The Power User menu includes a number of handy shortcuts for opening Windows 11 tools.You can also choose to show the desktop from this menu.Press Windows key + X to see the Power User menu. Then select the Desktop option there to hide all open windows. 4. How to display the desktop with Hot Corner 5. Show the desktop with keyboard shortcuts

Also, you can quickly display the desktop by pressing Win + M at the same time.Press this key combination to minimize all open windows.However, this keyboard shortcut doesn't restore all windows when pressed again like the show desktop hotkey.You need to press Win+Shift+M to maximize all windows.

Win + , (comma key) is a hotkey for the Peek function, you can press it to quickly view the desktop.However, this keyboard shortcut only shows the desktop when you hold down its key.When you release the hotkey, the software window will automatically reappear.So, you can't access the desktop by pressing that keyboard shortcut.

6. How to display desktop with touchpad and touch gestures

Touch and trackpad gestures are the swipes of your fingers that you can trigger various actions in Windows 11.You can use this gesture on touchscreen devices and touchpads, and it's available on many laptop keyboards (and some desktop computer keyboards).They're most useful on XNUMX-in-XNUMX laptops and tablets, like those in Microsoft's Surface line.

Note that touch/touchpad gestures need to be enabled in Windows 11 in order for you to take advantage of them.You can enable and configure gestures from the Touchpad and Touch section of the Settings app, as described on Microsoft's "Touch Gestures for Windows" page.

Address of this article:https://www.kkgcn.com/9407.html
Copyright Notice:The article only represents the author's point of view, the copyright belongs to the original author, welcome to share this article, please keep the source for reprinting!
0People like
share it:
PREVIOUS:How does the Apple Watch Ultra rank among other solid fitness trackers?
NEXT:9 Windows Processes You Can Safely End to Improve Performance

Microsoft Excel vs Power BI: How Do They Compare?