Want to record phone calls on your Samsung smartphone?Call recording is available on all Galaxy devices, simplifying the entire process.This also means that you don't need any third-party apps to record calls on your Galaxy smartphone.

Check out our guide below to record calls on Samsung Galaxy devices. Are you allowed to record phone calls?

Before you start recording with your Samsung Galaxy phone, you should know that due to local rules and regulations, this feature may not be available in your country or the region where you live.

1. In some countries, it is illegal to record a phone call without the other party's consent.So don't be surprised if the call recording feature is missing from your Samsung Galaxy device.In this case, you are out of luck, as there is no way to enable this feature.In a few places, even if the recording is legal, Samsung may still not implement it.This could help explain why the call recording option isn't showing up on your Samsung phone.

2. It is not possible to record VoWiFi calls, i.e. voice calls over Wi-Fi.

3. Also, please note that you cannot use third-party apps to record phone calls on Android.For privacy reasons, these apps do not work on Android 9 or higher operating systems.Any app that claims to work requires you to root your Android device, which could void its warranty.

So if your device lacks the call recording feature, you can't simply download an app from the Play Store to get this feature.

Samsung's call recorder doesn't play a pre-recorded message that tells both parties what the call is about.This gives it a big advantage over phones that use the Google Phone app as their default dialer.On such a device, it is impossible to record a call without the other party knowing.Every time you start or stop a call recording, all participants in the call will hear the "This call is now being recorded" message.

How to Automatically Record Calls on Samsung Phones

You can set your Samsung Galaxy smartphone to automatically record all calls.Depending on your preference, you can log calls from all contacts in the phonebook, selected contacts, or just unknown numbers. 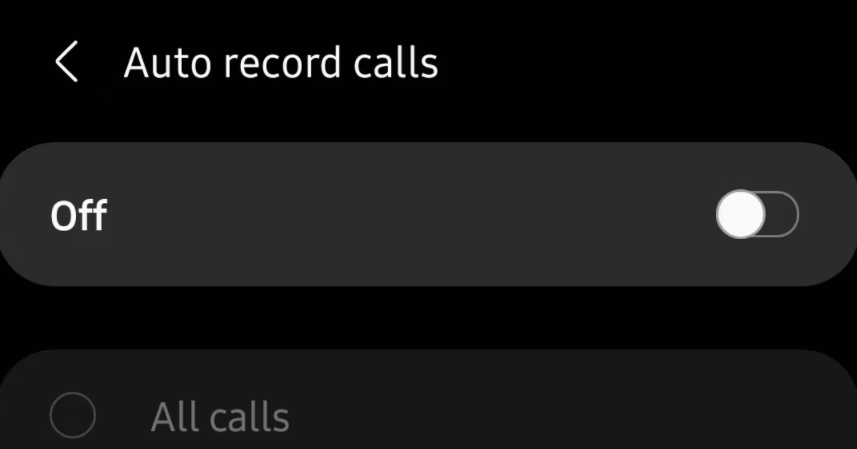 1. Open the Phone app on your Samsung Galaxy device.

3. Jump to the Auto record call menu and enable the feature.

4. Continue to select whether you want to log all calls, calls to unsaved numbers, or calls to specific numbers.

How to Manually Record Calls on a Galaxy Phone

You can also manually record individual calls on phones like the Samsung Galaxy S22, Note or Galaxy Fold series.The method is this:

3. The first time you use the call recording feature, you will be prompted to accept the terms and conditions.

Unlike some other calls, whenever a call is recorded, the other party will not be notified.This only happens on Android phones that use the Google Phone app as the default dialer app.

How to view recorded phone calls

You can view call recordings on your Samsung Galaxy device through the Phone app.

1. Open the Phone app on your Samsung Galaxy device.

You can select any recorded audio file and tap the share option to share the recorded call on WhatsApp, Gmail, Drive, etc.

As we've seen, the process of phone recording on a Samsung Galaxy smartphone is pretty straightforward, as long as local laws don't prevent the company from offering this feature in your area.

Remember that with power comes responsibility, so you should never record a call without notifying the other person.

Address of this article:https://www.kkgcn.com/9148.html
Copyright Notice:The article only represents the author's point of view, the copyright belongs to the original author, welcome to share this article, please keep the source for reprinting!
0People like
share it:
PREVIOUS:Chrome browser doesn't save your passwords?Here are 12 quick fixes to try
NEXT:How to use a PS4 or PS5 controller in older PC games

How to Compress Large Audio Files: 5 Simple and Effective Ways

Microsoft Remote Desktop: How to Access Windows from Your Mac