Virtual reality continues to evolve into new mediums, but watching video has always been one of its intended uses.

There are many ways to watch movies, shows and general video files in VR...but which apps are the best?Let's take a look at some of the best VR video players for Windows. What does a VR video player do?

There are a lot of different programs, social apps, and even games that allow you to watch some kind of video in VR.

VR video players, in the general sense, play video files in your VR headset.These may be normal video files projected through different lenses, or specific 3D video files that allow users to watch around the show.They are usually downloaded directly from the web and not played in their own app.

This makes VR video players different from some of the most popular ways to watch media in VR, as the purpose of the following programs is just to watch video files, not interactive media.

Whirligig is relatively old by VR standards, but that just means it has had time to develop a robust set of features.

This program is lightweight and simple.It allows users to view virtually any type of media, including photos, through the VR headset.

There are some lightweight visual elements like virtual theaters, but Whirligig is by far one of the most lightweight programs on this list. XSOverlay is not traditionally a video player.It is a desktop overlay that allows you to render active windows in your virtual space.

So while this program cannot play video files directly, it can easily be used to watch videos in VR, and XSOverlay in particular has a lot of features to enhance this.

With the ability to freely stretch, bend, and generally distort overlays, you can use XSOverlay quite effectively as a way to view video files in VR.Even better, XSOverlay can run concurrently with other apps, making it a great tool for watching content in the background.

Virtual desktopis a well-known VR app because of its versatility.It's already featured on our list of the best VR Windows programs for productivity, and it deservedly earns its place.

Virtual Desktop is not like a video player, but more like a normal VR desktop browser.However, it's capable of projecting whatever is on the display onto your headset, making it a great alternative to standard VR video players.

It's relatively lightweight, but it doesn't give you any options to view specific 3D video files. 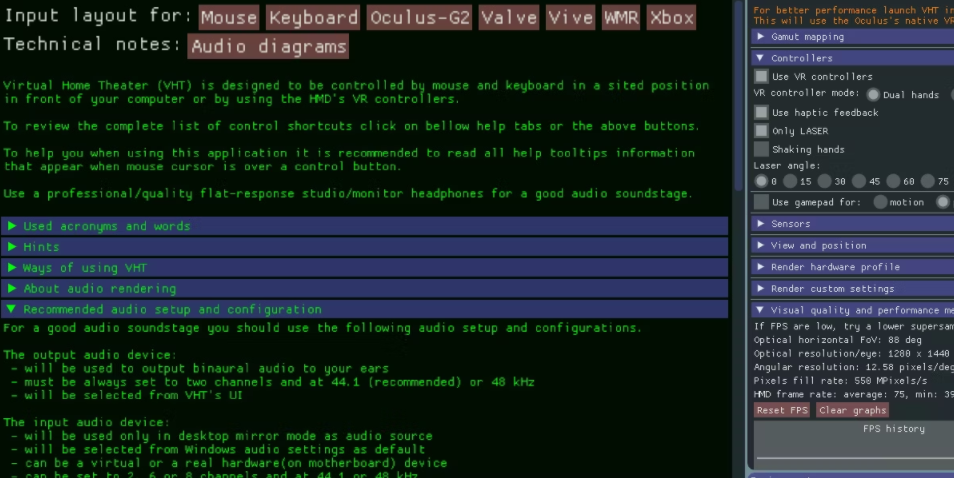 The Virtual Home Theater Video Player (VHTVP) is another expensive option, and the features here are more user-controlled than anything else.

VHTVP has many great features that other programs on this list don't have, like 4K+ video playback and full desktop mirroring, but it also comes with a considerable performance hit, and the experience is more similar toBigScreen, instead of the standard VR video player.

Still, it's one of the few options that lets those high-definition videos play in VR.And, VHTVP provides a free demo for users to try.

It has very low resource requirements.However, its user interface is fairly basic and some users will find it difficult to navigate.

You'll be browsing text-based directories in DeoVR, which is significantly less intuitive than menus designed for native VR use.

You have to consider its free price, though, and DeoVR does a good enough job.

HereSphere is one of the most expensive products on this list and, as expected, has the most features.

Stream video from the internet, edit your files, apply post-processing effects, and simulate spatial audio in flight, HereSphere is probably the most definitive VR video game on the market.

The downside of such a feature-rich program is that it's far heavier on system resources than others on this list.

Thankfully, this program has a demo available.Be sure to try it out before you buy, as HereSphere is as expensive as some VR games.

Skybox VR is another blockbuster on this list. Skybox VR has several powerful features that set it apart from the rest.The main thing is that it is able to detect the orientation and dimensions of your video files and apply them automatically.

This makes for a significantly smoother experience watching videos in VR, and you spend less time navigating menus.

The feature set here is comparable to the Whirligig, but at a slightly higher asking price.If you watch a lot of video in VR, it's probably worth the price.

BigScreen is more of a gaming or social experience than a video player.

Its main features revolve around virtual environments and multiplayer capabilities, which means its ability to play various 3D video files is fairly limited.

However, BigScreen is a very popular social program that is quite powerful at mirroring your desktop.

It will be able to play most of your videos in VR, and it's completely free too.Being one of the few free programs on this list might make it a very attractive option, depending on your budget.

Virtual reality for everything

Virtual reality has proven itself to be a flexible technology, and many people are surprised to find that it is not just for gaming.

If you own a VR headset, it's worth investing in some of these useful apps to ensure you're getting the most out of the hardware you're buying.

Address of this article:https://www.kkgcn.com/7689.html
Copyright Notice:The article only represents the author's point of view, the copyright belongs to the original author, welcome to share this article, please keep the source for reprinting!
0People like
share it:
PREVIOUS:5 Best Windows Clock Widgets
NEXT:6 ways to keep your email address private