If you're looking for a compact Android flagship phone, two of the best options right now are the Samsung Galaxy S22 and the Asus Zenfone 9.While not as popular as Samsung, some reviewers seem to think Asus' flagships are fairly underrated. 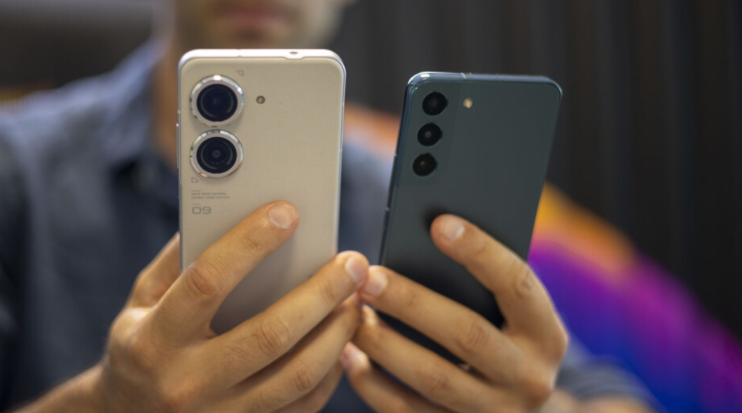 So let's see how they compare. The Zenfone 9 starts at €799 (about the same price in US dollars), while the Galaxy S22 starts at $799.Which one is the right choice for you? The Zenfone 9 and Galaxy S22 are nearly identical in size and weight, except that the former is wider and thicker, with flat edges and dual stereo speakers.Both phones have an official IP68 water and dust resistance rating.

The Zenfone 9 has a 3.5mm headphone jack, just like its predecessors, for connecting your wired headphones; Samsung did away with those jacks on its flagship a while back, which is baffling since wired headphones are almost in the Better than wireless headphones in every way.

Both phones can shoot 8K video on the back and 4K video on the front, though the S22 supports smoother 60fps selfie video. The S22 also has a telephoto lens with 3x optical zoom for shooting distant objects, and its ultra-wide lens has a wider field of view.

The Zenfone 9's main camera has a built-in gimbal stabilizer for more stable video, but the S22 can shoot HDR10+ video, so they're more dynamic. The S22's image processing is also more aggressive, giving you more images to share than the more natural-looking but sometimes bland-looking photos we've seen on the Zenfone 9. Both devices have a nearly identical FHD+ display, but the biggest difference between the two is that the S22 has thin even bezels, while the Zenfone 9 has distinct bezels at the top and bottom, making it look less premium , almost like a mid-range phone.

The S22 is also brighter, with a peak brightness of 1300 nits compared to the Zenfone 9's 1100 nits.According to actual testing, the typical brightness of the former (which is a more accurate number for judging brightness) is about 982 nits, and the latter is 800 nits.Neither phone features LTPO display technology.

Depending on your region, the S22 model you get may have Samsung's in-house Exynos 2200 chip instead of the Snapdragon 8 Gen 1.We don't recommend Exynos chips as they have historically been weaker than their Snapdragon counterparts, and there have been several reports of heating issues in the Exynos 2200's development.

We know there are plenty of cooling solutions for the S22 Ultra, but Samsung didn't advertise the same for the vanilla S22.Thankfully, the Zenfone 9 does have a vapor chamber cooling system, so your device shouldn't overheat while gaming.

Neither phone has an SD card slot.

The biggest problem with compact phones is that since there is less space in the device body, the battery must also shrink.But the Zenfone 9's 4300mAh battery will easily give you more battery life than the Galaxy S22's 3700mAh battery.In terms of charging, the former leads again, supporting 30W, while the latter supports 25W.

However, Asus does include a 30W charger in the box, which is very rare these days.If you buy the S22, you must use your existing charger or buy a new 25W charger.

There's a lot to like about the Asus Zenfone 9.Headphone jack, larger battery, dual stereo speakers, vapor chamber cooling system, gimbal stabilizer, and of course, the charger and back cover in the box.

However, if you're going to spend $800 on a phone, you want it to actually look like a flagship.And the S22 is the clear winner in this case thanks to its thin unified bezels.All in all, the Galaxy S22 is the safer bet (if you opt for the Snapdragon version), but the Zenfone 9 gives you more bang for your buck.

Address of this article:https://www.kkgcn.com/6829.html
Copyright Notice:The article only represents the author's point of view, the copyright belongs to the original author, welcome to share this article, please keep the source for reprinting!
0People like
share it:
PREVIOUS:10 Best iPad Tips for Beginners
NEXT:9 Best AI Video Generators (Text to Video)