The icons at the top of our screens have changed a lot from design to meaning over time.As more features are added to our smartphones, more icons appear.

Let's explore some of the most common Android status bar symbols so you can better understand the status of your phone.

What is the Android Status Bar?

Android's status bar is a bar of icons that runs across the top of the screen.The upper right corner is dedicated to showing the main status of the device, while the left is used to display notifications from the app.

Swipe down from the top of the screen and you'll find access to recognizable tools like Wi-Fi, Bluetooth, mobile data, and maybe location and battery saving.You can also easily customize this quick settings panel.

Clicking on one will enable or disable the feature.When enabled, an icon representing the tool should appear next to the battery icon in the upper right corner of the screen.The upper-left corner of the screen is reserved for notifications, so icons that appear here are usually associated with an app, such as Instagram or a missed call. 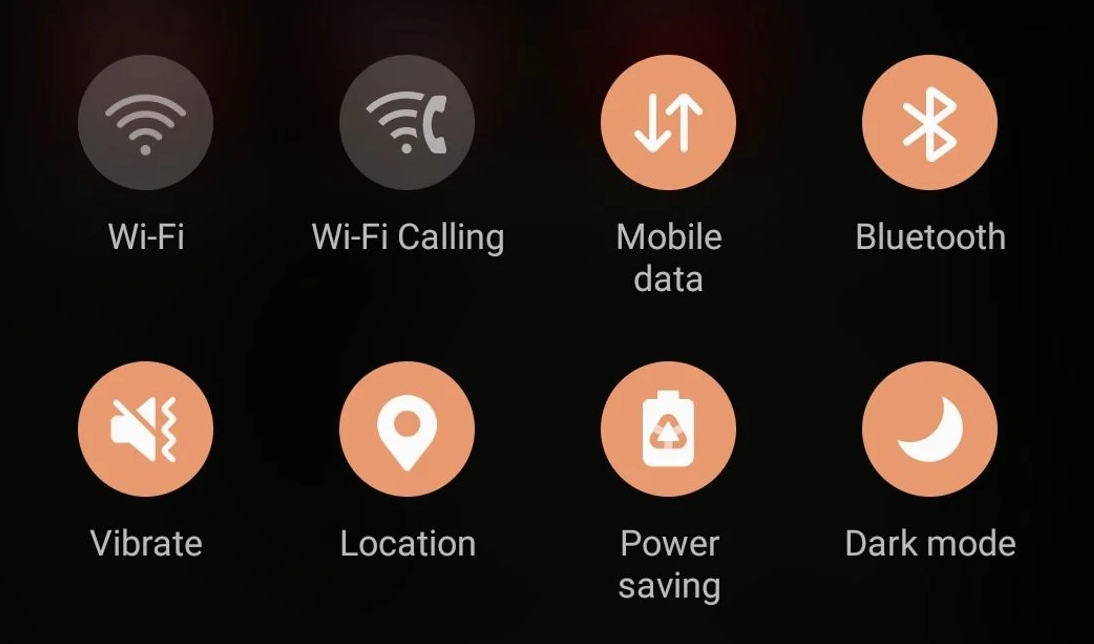 Try enabling and disabling Wi-Fi on your device, and you'll find the icons on the status bar appear and disappear accordingly.The status bar will serve as a way for you to quickly determine the status of your device.Having trouble loading a webpage?A quick glance at your status bar might tell you that you don't have mobile service or Wi-Fi.

What do the symbols in the status bar of an android phone mean?

Now that we've covered the location and purpose of the Android status bar, let's take a look at the common icons you'll find in the upper-right corner of the screen.You'll definitely recognize a few of them, but there's still a lot to learn about these little icons.

The easiest icon to interpret is the battery icon.These include typical battery states, possibly accompanied by percentages.A simpler version would just show a properly charged battery.There's also the battery charging icon, which appears when your phone is currently charging.

And more that you see often:

Battery saver mode is indicated by a battery with a recycling symbol.

There's also a unique icon for a low battery, which usually means between fifteen and five percent -- that's a battery with an exclamation mark, or a battery with a red charge remaining.

The network bar and Wi-Fi icons represent your mobile and Wi-Fi network connections, respectively.These icons show a rough approximation of either signal strength with variation.

The number of fill bars can be used to measure your signal strength, but some carriers also display network speed next to this icon.This can be a small LTE, 4G or 5G hovering next to the bar icon; however, these symbols can also stand on their own.

There are other icons corresponding to the data:

A set of vertical arrows pointing in opposite directions represent your mobile data.When it's enabled, you can take advantage of your service provider's mobile network -- this is accompanied by the strength and speed icons we just discussed.

The horizontal arrow represents the ability of the device to make calls over LTE.This is called VoLTE, or Voice over LTE.

A circle with a plus sign inside means you can, or have enabled data saving on your Android device.It just means that your device is using as little data as possible.

There are several icons focused on sound and vibration.The most obvious of these is the phone icon, which changes between active calls and missed calls.There's also a unique icon for allowing calls from Wi-Fi enabled devices, which is as simple as a combination of the Wi-Fi and phone icons.

1. If you mute the microphone during a call, you may find a crossed-out microphone in the status bar.

A speaker with sound waves means you have voice.

A crossed-out speaker means the phone is on silent, but a chevron line is added to indicate vibration mode.

3. A small alarm on the status bar means you have an active alarm on your phone.

A line with an arrow, facing up or down, notifies you that there is an upload or download in progress:

1. An up arrow means you have uploaded something, such as a PDF, to your Google Drive.

2. A down arrow marks download, which may just be downloading an image from Google.

3. A completed download may be indicated by a line of check marks instead of an arrow.

Some icons are used to remind you of various connection methods, whether physical or Bluetooth:

1. The B icon will appear whenever your device is connected to another device via Bluetooth.

2. Whenever your phone is connected to another device via a USB connection, the USB symbol may appear in the upper left corner instead of the upper right corner.

3. Whenever you cast from your phone to another device on the network, a box with the Wi-Fi symbol will appear, usually in one of the corners of the box.A simple example is casting a YouTube video from your phone to your living room TV.

4. The airplane icon means that you are not connected at all.It stands for Airplane Mode and it disables your device's ability to send and receive signals.When activated, the icon usually replaces the bar and Wi-Fi icons.

You'll see many other icons in the status bar from time to time.

One that often confuses users is the N icon.This tells you that NFC or Near Field Communication is active on your device.

This technology lets you share data between two phones in close proximity, or tap your phone on a payment portal to use your phone like a debit card.

1. An upside-down water drop with a hole represents some kind of location service, such as a location sharing or GPS application.The Google Maps app will use this icon when activated.

2. The crescent moon icon may not appear in your status bar when activated, but it's worth noting.This tool, Dark Mode, is used to darken the overall interface of your phone; the same applies to the app interface and system tray.For example, YouTube will be dark grey instead of white.

3. Focus mode is used to block notifications from some apps, allowing you to work without interruption from any app you choose.This icon is usually two circles, one inside the other.

4. Another variation on this is Do Not Disturb, which blocks all notifications -- the icon is a solid circle with a horizontal dash.

In addition to that, you'll see specific app icons whenever you get a notification.These could be related to emails in the Gmail app, incoming tweets or Instagram messages, indicators that show you've taken a screenshot, and more.

Now that you know some of the most common Android status bar icons, you can easily grasp the various states of your phone with a quick glance at the top corner of the screen.

Address of this article:https://www.kkgcn.com/5000.html
Copyright Notice:The article only represents the author's point of view, the copyright belongs to the original author, welcome to share this article, please keep the source for reprinting!
0People like
share it:
PREVIOUS:The 5 Best High-Performance Electric Cars on the Market
NEXT:7 Vintage Apple Products That Are Valuable Today