Most consumers tend to buy budget mid-range smartphones.If you're going to buy a phone like this in 2022,Galaxy A53 5G和iPhone SE 3are your two best options.They are two of the best mid-range phones around.

The former starts at $449 and the latter at $429.Next, let's take a look at the main differences between the two phones. 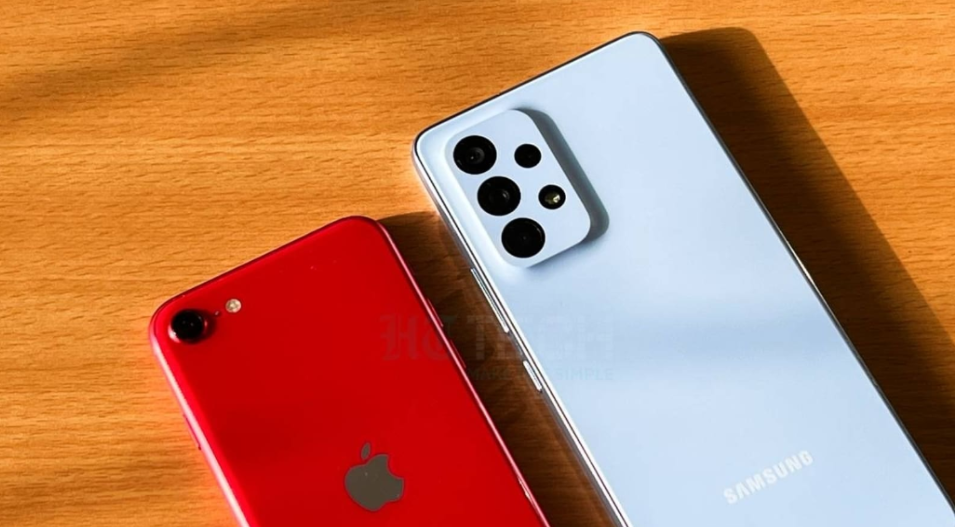 The Galaxy A53 has a plastic back with a smooth, matte finish, just like its predecessor, the Galaxy A52, but it doesn't feel as premium as the iPhone SE 3's glass back.If feel is important to you, the iPhone is your go-to, especially if you like smaller phones.

Speaking of feel, the iPhone SE also has much better haptic feedback than the Galaxy A53.However, the Gorilla Glass 5 protection on the front of the latter is stronger, while the former uses the same glass as the 2017 iPhone 8.

Both devices are IP67 rated for water and dust resistance.While it's not the same as the flagship IP68 rating, it's close enough.

There are five cameras in total on the Galaxy A53 and two on the iPhone SE 3, which means the latter doesn't have an ultrawide or macro lens.As far as the main camera goes, both take great pictures.

However, the Galaxy A53 has cooler tones and more playful colors, while the iPhone SE has warmer, more natural colors, one of the many known camera differences between iPhones and Samsung phones.

The display is perhaps the most obvious difference between the Galaxy A53 and the iPhone SE 3.The former has everything you'd expect from a mid-range phone display in 2022. AMOLED color, 120Hz refresh rate, thin bezels, and Gorilla Glass protection.

The iPhone SE 3, on the other hand, uses the same display Apple used in 2017.A small 4.7-inch LCD screen and thick bezels on the top and bottom make this device's display conflict with 2022 standards in every way.But at least you'll get a physical home button, if you still like that kind of thing.

When it comes to performance, there is no competition between the Galaxy A53 and the iPhone SE.The latter is the clear winner, as it has Apple's flagship A15 Bionic chip.For reference, this is the same that Apple uses in its iPhone 13 lineup, and the A53 is equipped with a mid-range chip.

If you're a gamer or power user, the iPhone SE will serve you better given its incredible raw power and efficiency.It's just that the iPhone SE's 4.7-inch screen doesn't necessarily give you the best gaming experience.

Compared to the A53, the base version of the iPhone SE 3 has half the storage at 64GB and 128GB, respectively.However, if you need more storage, you can expand both to 256GB.

The iPhone SE's 4GB of RAM is also less than the Galaxy A53's 6 or 8GB.However, since iPhones use less memory than Android phones, the difference may not be noticeable if you opt for an iPhone.

There are data showing that the Galaxy A53 has better battery life than the iPhone SE 3, which is not surprising since the former has a battery that is more than twice the size of the latter.

As far as charging goes, both devices support fast wired charging at 25W and 20W respectively.However, since the Galaxy A53 has a plastic back, it can't support wireless charging, while the iPhone SE's glass back does.

The iPhone SE 3 is a very different phone from the Galaxy A53.Both devices try to achieve different goals.The former is Apple's entry-level offering for those who want to experience an iPhone at an affordable price, while the latter is a full-featured product that's clearly a better option for the average buyer.

Sure, the iPhone SE 3 is more powerful and less expensive, but it's also quite unbalanced.Granted, the design is classic, however, it may be outdated.

Address of this article:https://www.kkgcn.com/3153.html
Copyright Notice:The article only represents the author's point of view, the copyright belongs to the original author, welcome to share this article, please keep the source for reprinting!
0People like
share it:
PREVIOUS:iPhone vs Android: Which is Safer?
NEXT:Xbox Cloud Gaming vs. Google Stadia: How should you choose?