when you first start usingLinuxYou may come across new terms and jargon that you are not familiar with.For many users, this can be an opportunity to learn something new, while for others, the use of unnecessary terminologyLinuxAnd the open source world looks complicated.

If you find yourself in a similar situation but would rather embrace the uniqueness of Linux than escape, we've compiled some of the most common Linux terms and jargon for you to make your transition to Linux as smooth as possible.

"Linux" is the most common and prominent term.You might think that anyone who has installed Linux probably knows what it is.But this is not the case.Some users mistakenly think that Linux is an operating system.Instead, Linux is a free and open source kernel developed by Linus Torvalds in 1991.

The kernel is the part of the computer that helps the operating system interact with the hardware.Every time you click a button on the screen with the mouse or press a key on the keyboard, the information goes through the kernel, which in turn communicates with the operating system, taking the data as input and displaying the output using the hardware (display).

GNU, a recursive acronym for "GNU's Not Unix", is a set of open source tools that anyone can use for free to develop their own applications and operating systems.The GNU Project, created by Richard Stallman, aims to develop and distribute software for free, with open-source tools for every developer. 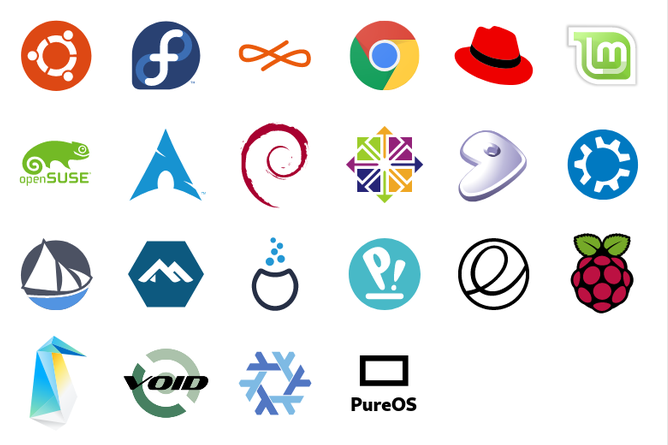 Developers and Linux tinkerers also release spins and hybrids of mainstream Linux distributions. "spin" or "remix" refers to a customized or derived version of the original operating system.Generally speaking, the difference between a base OS and its spin is the choice of desktop interface or software package, or both.

Take Ubuntu as an example.It comes in several flavors, including Xubuntu, Lubuntu, and Kubuntu, each with a different desktop environment.Similarly, Fedora refers to its unofficial spinoffs as "spins." In general, spins, remixes, and flavors, each with the same meaning. To make computing easier for users, the operating system has a desktop that provides a graphical way to manage the system. Windows and macOS are known for their iconic desktops, but Linux does it very differently. A window manager is a program that controls the position and movement of windows on the screen.While window managers usually work behind the scenes in a desktop environment, you can also use them individually on your Linux machine.For non-technical users, though, they can be complicated to set up, which is the main reason why not everyone likes to use them in the first place.

Window managers are lightweight and offer better performance than desktop environments because they don't come with a ton of unnecessary apps and gadgets.If you choose a window manager, you even have to install a separate menu and compositor.

If you're new to Linux, you may remember glimpses of a black window with lots of text on it.This is the Linux terminal, also known as the command line.

A terminal is a program used to control the shell of your operating system.A shell is a text- or graphics-based interface that you use to interact with your desktop. Linux Terminal is similar to Windows' Command Prompt, helping administrators to effectively control and manage their systems.

On the other hand, the root user, also known as superuser, or simply root, is the user who has all administrative rights.The root user can view and edit any file, make modifications to the system or other users, and even delete entire directory hierarchies.Simply put, it is the Linux user with the highest level of control.

A package in Linux refers to an archive that contains files needed to execute or install a program. Software on Linux is usually released in the form of packages, and there are two types of packages available to users: source packages and binary packages.

A source package contains the source code of a program that the user must manually compile and install to run the software.Binary packages, on the other hand, contain prebuilt and precompiled executables of the software.

A software repository is a remote server that stores a collection of software packages and associated metadata.Each Linux distribution either has its own set of repositories or uses its parent distribution's repositories to provide software to users.

A startup program is a program that is responsible for starting your computer.Typically, the operating system and its data are stored on non-volatile storage disks, such as hard disks.The bootloader helps load the correct operating system at startup and adds the initial process in memory.

GRUB is one of the most commonly used bootloaders when dual booting Windows with Linux.Other examples include LILO, BURG and Syslinux.

Every program you start on your system runs in the background as a collection of processes.A process is a basic instance of a running program that performs computations on your computer.

The web browser you just opened to browse the Internet starts a process, or set of processes, to help you interact with it and browse the Internet.Likewise, your system's file manager, terminal, media player, and every other program depend on processes to produce output.

As mentioned earlier, the shell is an interface that helps you interact with the system.It can be a command line interface like Terminal or a graphical interface like GNOME Shell. The shell also acts as an interpreter for any command you type in the terminal.

You can install several different shells on Linux.For example Bash, Zsh, Fish, sh, Ksh, etc.Every shell does the same thing: to help users and processes interact with other processes on the system.

When you write a set of Linux commands and pack them into a single file, the resulting file is called a "shell script." Shell scripting is the process of writing a script using Linux commands, which are then interpreted by the shell installed on the system.Batch scripts are the Windows equivalent of shell scripts on Linux.

The most popular form of shell scripting is Bash scripting, which refers to writing and executing scripts using the Bash shell. Shell scripts are a powerful way to automate tasks on Linux machines; they make computing much easier and more fun for users.

Knowing these terms and jargon, you are one step closer to becoming a Linux professional.To be able to use the full potential of Linux, you should be proficient at the command line and know how to troubleshoot the operating system to make it work for you, not clutter.

Address of this article:https://www.kkgcn.com/2855.html
Copyright Notice:The article only represents the author's point of view, the copyright belongs to the original author, welcome to share this article, please keep the source for reprinting!
0People like
share it:
PREVIOUS:What is Bixby and what can you do with it on your Samsung phone?
NEXT:Dyson's new headphones add air-purifying features