1. Improvements to RAM Plus 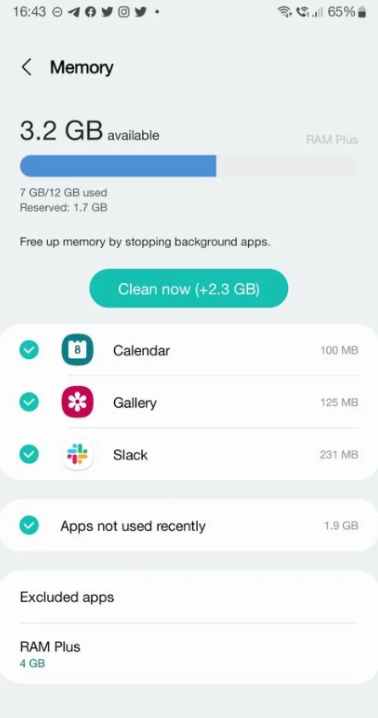 An update to One UI 4 brings the RAM Plus feature to Galaxy devices, which enables them to use the device's built-in storage as virtual memory.existOne UI 4.1, RAM Plus has been improved again, allowing you to freely choose the size of virtual memory: 2GB, 4GB, 6GB or 8GB.Previously only 4GB was an option.Samsung claims that using RAM Plus can effectively improve the smoothness of your phone.

Borrowing from iOS 14's Smart Stacking Gadgets feature, Samsung has also added a Gadget Stacking feature in One UI 4.1 that lets you stack gadgets on top of each other.This way, you can save space on your home screen.Note, however, that Smart Widgets only work with the existing Samsung launcher.

One UI 4.1 further improves the integration between Samsung's Gallery app and Microsoft's OneDrive cloud service.As long as you're signed in to your Galaxy devices with your Microsoft account, your gallery content will sync across those devices.

With One UI 4.1, Samsung Pay will be more than just a mobile payment service.You can now use it to store your driver's license, boarding pass, car keys, and more.

Samsung has adopted Material You and Dynamic Theming in One UI 4.In One UI 4.1, the company tweaks the palette selector with a new rectangular preview, making it easy to choose the exact color you want for your phone's interface.

In One UI 4.1, Samsung's Calendar app has gotten smarter, thanks to deeper system integration.It now automatically reads the date and time in the message and allows you to create a new event directly.The feature will also work with third-party apps like WhatsApp, Skype, Messenger, and more.

To use it, you need to open the Samsung Calendar app, tap the "+" icon, and event suggestions from compatible apps will automatically appear.

Samsung has long offered a Pro mode in the camera app on its Galaxy phones.However, so far, it only supports the main camera. One UI 4.1 further expands Pro Mode to other camera sensors.Whether or not this improvement appears on your phone will depend on your model, though.

Another camera-related improvement in One UI 4.1 is support for Night Mode when shooting portraits.This will allow you to take more detailed and vivid portrait photos even in low light.

The edge detection algorithm for Portrait Mode itself has also been improved, but it may be limited to the Galaxy S22 series due to the hardware enhancements on these devices.

In terms of features, One UI 4.1 may still have some shortcomings, but it is a decent follow-up to One UI 4, introducing some major usability improvements.While it debuted on the Galaxy S22 series, it should eventually make its way to just about every mid-range and high-end Galaxy device.

Address of this article:https://www.kkgcn.com/2198.html
Copyright Notice:The article only represents the author's point of view, the copyright belongs to the original author, welcome to share this article, please keep the source for reprinting!
0People like
share it:
PREVIOUS:What are function keys?Comprehensive analysis of the function keys of the Windows keyboard
NEXT:4 new features coming to the Google Messages app on Android