AirTags is known for its tracking feature, which you can use to stick and track luggage, wallets, keys, and other misplaced items.They're small and easy to use, and they'll be nearly invisible unless a nearby Apple device alerts you to their presence.Therefore, these devices can easily be used for tracking, stealth tracking and other purposes.

Although Apple has specific security measures, this is still not reassuring; it is important to see if you are the target of being tracked, and to learn what to do if you are being tracked.

We have prepared a simple step-by-step guide for you on how to detect and disable on iOSApple AirTags.

Find the listed devices detected in the "Find My" alert

If an AirTag that doesn't belong to you, or an AirTag that is detached from its owner starts tracking you, the Find My app will send you a timely alert stating "AirTag found moving with you"

If you're not in the habit of viewing these alerts, open the Find My app, click an item, scroll to the bottom, and click a detected item to see a list of all previous alerts of this type.

If you don't have an Apple device but suspect AirTag tracking, you can use Apple'sTracker Detector Android app that protects you from tracking by AirTag.

Use the "Play Sound" feature to detect AirTags

How do you find a hidden AirTag?After all, they could be anywhere nearby - criminals are even using them to steal cars.But do you know how people used to call a lost phone to track it down by its ringtone?You can use a similar approach with AirTags.

1. Tap the AirTag Found Moving with You or AirTag Detected Near You alert.

4. Follow the source of the sound to find the rogue AirTag.You can play the sound multiple times until you find it.

However, sometimes you won't be able to play the sound due to changes in the Bluetooth identifier or the presence of the owner.

Do a manual search 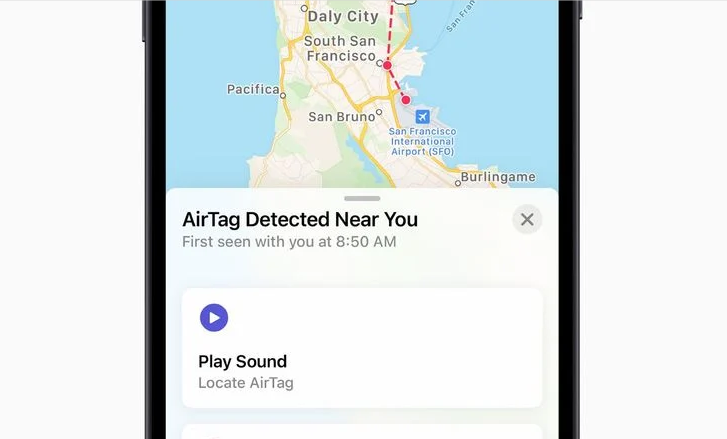 If you cannot detect AirTags electronically, do a manual search of the surrounding area.Click on the AirTag alert to open the tracking map.A series of red dots connected by red dotted lines represent all the locations where these AirTags have been detected by you before.Thoroughly search for items near the last location on the map in the alert.

For example, you just got in the car, but the AirTag was detected before that, which means it is not hidden in your car.You can use exclusion to track it down.

If you find an AirTag, you can try disabling it, or seek help from law enforcement to report suspicious tracking.

How to Disable Apple's AirTag

Once you find an AirTag that is trying to track you, you should disable it decisively, here's how:

Once you've found the AirTag that's tracking you, pair it with any device that has Near Field Communication (NFC) for more details.Hold the NFC device close to the white side of the AirTag and wait for the notification.

2. Take a screenshot of AirTag details

There will be some important information in the notification, such as the serial number of the AirTag and the last four digits of the phone number it is registered with.You can screenshot these details for future use.

If the owner marks it as lost, there may be more details on how and where to return it.If not, and you suspect you are being followed, follow the instructions to disable the link.

3. Remove the battery of the AirTag

Press down on the back of the AirTag, turn it counterclockwise, then remove the cover, now remove the battery, make sure the AirTags stop sending your location data to the tracker.You can also share this device with law enforcement to help them with follow-up investigations.

Apple's ecosystem is primed to handle any unnecessary use that Apple AirTags may be put to use.In addition to built-in safeguards against unwanted or covert tracking, as well as additional anti-tracking measures for AirTags in iOS updates, using AirTags to track people is also illegal.Apple has made it clear that it will comply with any law enforcement data requests to support such investigations.

Removing the AirTag's battery is the most effective way to avoid being tracked, thoughApple AirTagsIt's a great device for tracking your belongings, but you still need to be vigilant, lest AirTags be misused and abused by those with ulterior motives, making them the perfect weapon for stalkers.

Address of this article:https://www.kkgcn.com/2101.html
Copyright Notice:The article only represents the author's point of view, the copyright belongs to the original author, welcome to share this article, please keep the source for reprinting!
0People like
share it:
PREVIOUS:How to Convert Your Word Document to a JPG File
NEXT:How to Add Contacts to Your iPhone Home Screen and Call Them with One Touch